When discussing the issue of counterfeit electronic components, we often rely on results from incoming inspections or results from failed systems upon deployment. We seldom have the opportunity to see the counterfeit component fail. One of our customers, a large military original equipment manufacturer (OEM) that shall remain nameless, recently sent us this case study. They can’t publish it, but we can.
What you see in this incredible video is an electrolytic capacitor exploding a few moments after power up. This video was captured after some of these boards failed during burn-in. For this reason one of their engineers decided to document the event by filming the explosion.

So how could they determine this was not some other issue, and that indeed it was a counterfeit problem? First, this was not the first time they made this board, which rules out a design defect. Second, they were able to correlate the explosion problem to a batch of capacitors they bought from an independent distributor (ID). It was the first (and likely the last) time the OEM bought parts from this ID. Third, they were able to compare the counterfeit capacitors with good capacitors previously used in this design.

The following photo shows the electrolytic capacitor in question. A careful visual inspection of 100% of the parts in the lot in question did not present any inconsistencies. A further comparison to the good parts used previously also did not show any issues. Based on this data they were not able to determine the legitimacy of this component using visual inspection.

The next step taken by the OEM was to perform a 100% x-ray inspection using their TruView 280 x-ray inspection system. Here are some of the images they’ve shared with us. On the left you can see the reference component capacitor – a component from the previous known good lot they bought from a large authorized distributor. The x-ray image on the right shows a capacitor from the new lot they bought from the ID. There are significant structural differences between the two parts.

They also found solder residue on the leads of the counterfeit capacitors. The following high magnification images show the location of the solder residue. This residue was not detected during the visual inspection because it is too close to package of the capacitor, and in some instances inside the plastic package. 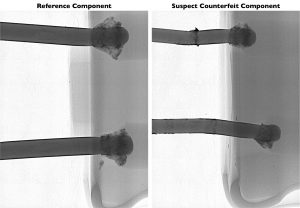 Why were they lucky?

To better illustrate this point, the following chart shows data collected by the U.S. Department of Commerce’ Counterfeit Electronics Survey. Published in August of 2009, the report shows that most companies learn of counterfeit parts when they return from the field as defective. As we already established, that is the most costly way to find about a counterfeit component. 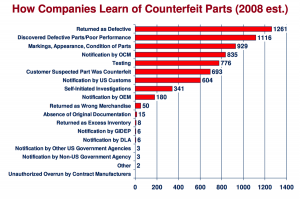 Only expensive parts are counterfeited

The following data shows the number of counterfeit incidents as a function of the price of the component. Components between $0.10 and $500 are the most commonly counterfeited. It is not a surprise that the electrolytic capacitors reviewed in this post are well inside this range. 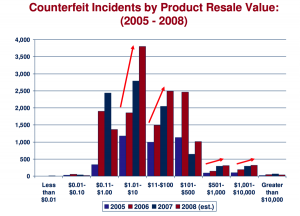 Some companies erroneously believe that a counterfeit mitigation program can be limited to buying from a selected number of suppliers. This OEM only buys components from qualified companies in their approved vendors list (AVL). That works until they really need a component that leads the OEM to have to buy it from whoever has a part to sell. It’s either that or missing a delivery deadline. That’s exactly what happened here. It is very challenging to keep the AVL discipline when the production line is stopped and parts are desperately needed. The following data shows the probability of buying a counterfeit component from different source in the supply chain. 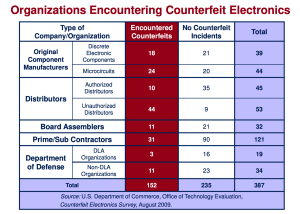 Typical behavior that contributes to the counterfeit problem

The Dark Side of the Chip Shortage: Counterfeits

It’s February 2021, and as the world slowly recovers from the COVID19 pandemic another problem plagues the global economy – the electronic component shortage. What...

X-ray is the New Black

While purveyors of luxury fashion have generally held resellers in low esteem, the tables may be turning.  Because fashion resellers add value through authentication, they’ve...

Fireside Chat with the Xperts: Stump the Chumps IV

There's just no stumping these two:  Drs. Glen Thomas and Bill Cardoso were back for another Fireside Chat with the Xperts, once again fielding questions...