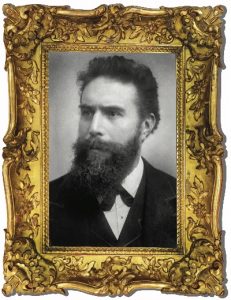 “Great discoveries are made accidentally less often than the populace likes to think.”– Wilhelm Rontgen

If Marie Curie is the Godmother of our industry, Wilhelm Rontgen is certainly the Godfather. In fact, he’s the one who discovered x-rays!

Rontgen was born at the turn of the century in a small town in Germany. Rontgen would certainly prove to be more than his roots had predicted. As NobelPrize.org describes him, “He did not show any special aptitude, but showed a love of nature and was fond of roaming in the open country and forests.” With the discovery of x-rays Rontgen would enjoy celebrity and receive the Nobel Prize in physics.

Rontgen would resign himself to poverty in death in the midst of the Weimar Republic, in spite of having discovered a technology that would help save soldiers on both sides of the war. So now we honor him, on what would have been his 123rd birthday. Happy Birthday, Rontgen! Thanks for helping save countless lives and limbs, and for posthumously staring in our x-ray ads!

As I reflect on 2021, I don’t really know where to start. I’m inclined to open with gratitude. Or, should I start with admiration? Pride?...

There’s Still Time to Get an X-ray System Under the Tree!