In Honor of Marie Curie

All my life through, the new sights of Nature made me rejoice like a child.”- Marie Curie 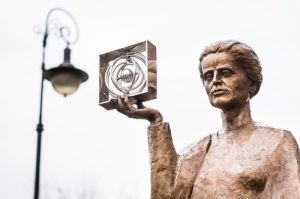 Today is International Women’s Day, and to celebrate Creative Electron is honoring Marie Curie. She is the God Mother of our industry, famous for discovering the radioisotopes polonium and radium. In addition to these achievements she is the only person to have won Nobel Prizes in multiple sciences, and for becoming the first female professor in France, according to “A Mighty Girl.”

Marie Curie achieved success and acclaim in spite of professional barriers to a woman at the turn of the 20th century. She was only ever fully recognized for her accomplishments years after the fact, including not receiving her faculty position until the tragic death of her husband. However, she persisted. Later in life, Curie would invent the first portable x-ray machine, which she personally used for wounded soldiers on the front lines of World War I. She was such the patriot, she even offered her two Nobel prizes be melted down and used for the war effort, according to the “History Chicks” podcast.

Marie Curie died of complications from prolonged handling of radiation. She is still remembered for ger revolutionary contributions to science and technology.

In honor of Marie Curie, we will be profiling women at our company this month who actively contribute to technological progress. We will have stories across different professions in the tech industry. Make sure to follow Creative Electron on Facebook and Twitter for weekly updates on these women’s stories.

As I reflect on 2021, I don’t really know where to start. I’m inclined to open with gratitude. Or, should I start with admiration? Pride?...

There’s Still Time to Get an X-ray System Under the Tree!