We had a fantastic first day at SMTA International in Chicago. We had a chance to catch up with old friends and meet new ones. We also attended some very interesting talks. Talking about old friends, Ed Knutson from Dimation (a quick-prototype contract manufacturer in Burnsville, MN) stopped by our booth for a visit this afternoon. He brought his brand new iPhone 6 for a live teardown at SMTAI. So we put our TruView Cube to action! Here are some photos of Ed’s iPhone 6 ready for the teardown. 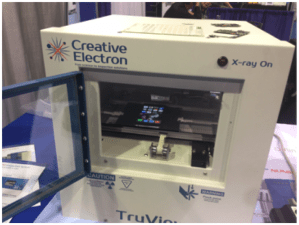 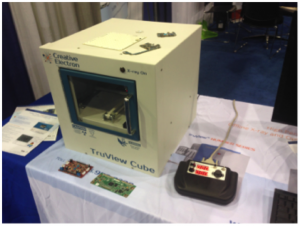 We’ve done teardowns of a wide range of smartphones, and I must confess, they don’t look that different from each other. Not a lot has changed from the iPhone 4S to the iPhone 5S. Even when compared to the Samsung Galaxy S5, there are not a lot of new things. The iPhone 6 was a different story. The following images will show you quite a few new features.

But first, here are some specs for the new iPhone 6:

– Apple A8 processor with 64-bit architecture 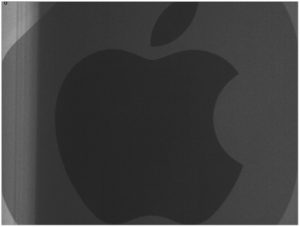 The first change we noticed was the Apple logo on the back of the phone. Unlike the subtle texture change of the previous models, the iPhone 6 houses a stainless steel logo that shows in our x-ray as clear as day. Perhaps Apple decided to show off for our x-ray teardowns – and for that we thank you Mr. Cook!

Another great improvement of the iPhone 6 platform is the camera. Here’s the x-ray image of the top of the iPhone 6 showing both the FaceTime (right) and iSight (left) cameras. You can also see the flash LED has been beefed up quite a bit. We also noticed a lot of voiding in the assembly of the flash LED. To learn more about what that means please visit LED assembly: how excessive voiding costs you money. We also noticed the 2 MEMS microphones – one to the right of the iSight camera, the other to the left of the FaceTime camera. While the FaceTime microphone is likely used during conversation utilizing the FaceTime camera, the iSight microphone is used to reduce ambient noise from phone conversations. By collecting the voice signal and the ambient noise, a signal-processing algorithm can be used to reduce noise from the data (a.k.a. voice) channel.

This is a nice image to show you the complexity around the new A8 processor… a lot going on around Apple’s new processor.

The SIM card connector is well defined in the iPhone 6. Note the voiding in the solder balls of the connector. 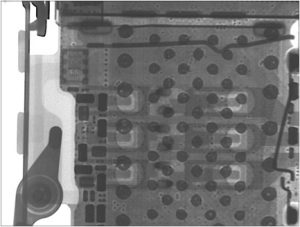 Nice detail shot showing one of the many antennae connections in this iPhone.

The iPhone 6 has the antennae clearly separated in the design of its case. An aesthetic feature loved by some, hated by others. Here it is seen from the inside out, both left and right of the phone.

Also seen here is the TouchID sensor and the Lighting data and power connector. 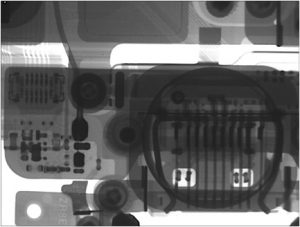 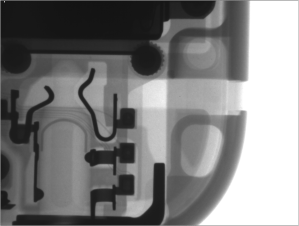 We look forward to the iPhone 6 Plus teardown – stay tuned!

When Creative Electron's Gamers Nexus fan club shared their video of the NZXT H1 riser catching fire, we felt compelled to reach out and see...

With a bit of insight from the team at Creative Electron, our friends at iFixit embarked on their teardown of Airpods Max, Apple’s first-ever over-ear...

Through our partnership with iFixit, we've imaged every iPhone model ever made.  Take a trip with us back in time as we chat with Jeff...