The Renaissance of Made in USA at Maker Faire

It’s 6AM in New York City, and my Southwest flight back to San Diego is ready for takeoff. We spent the weekend here to exhibit our x-ray systems at the 2014 International Maker Faire. If you’re not familiar with the Maker Faire, imagine a combination of a tech show, craft show, and Comic-Con. It’s a place where people come together to share their creative drive – and to air the gadgets they build in their basements. Other than a geek fest, Maker Faire is a place where it is cool to be smart.

Over the weekend we had the chance to meet people like Nigell Dennis, an 18-year-old from Brooklyn who developed and built NAVI, his own Arduino-based smartwatch. Next door to our booth we met a group of rocket scientists who got together to design and manufacture APOLLO, a datalogger that packs 11 sensors in a tiny package. And of course, we also met Richard Carter and his Sashimi Tabernacle Choir. Why do you ask… why not they answer!

The unifying factor in the Make movement is a common drive to innovate. For fun or for business, what united us is the simple desire to push the envelope. Nigell didn’t wait for the Apple Watch, he developed his own in his garage. The same way Steve Jobs didn’t wait for IBM to develop a personal computer, he made his own in his garage. What better way to define us as a people than those not satisfied by the status quo? Those who braved the west, put men in the moon, cured diseases, and challenged every concept of stagnation. Innovation is the fabric of our society.

Much has been said about America’s continued motion towards outsourcing. Some go as far as saying that all hope is lost, and that the USA is deemed to a lesser role in history as a country of customers. These critics claim that manufacturing in America is prohibitively expensive and regulated. Some empirical evidence tends to favor these claims – it seems that more things everyday are made somewhere else.

A few weeks ago I wrote the post Made in USA: So What?! to describe a few of the reasons why Creative Electron manufactures x-ray machines in USA. This weekend we met with similar minded inventors and entrepreneurs committed to reclaiming America’s leadership in manufacturing. Needless to say the conversations were more about “how can we make this better” then “how can we cut 2 cents in the manufacturing cost of this unit”.  It was comforting to realize we’re not alone.

The trip to the Maker Faire renewed my hope in the American experiment – a place where innovation and ingenuity meet to create sustainable economies. 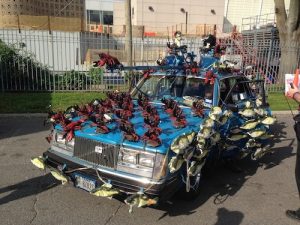 With a bit of insight from the team at Creative Electron, our friends at iFixit embarked on their teardown of Airpods Max, Apple’s first-ever over-ear...

Through our partnership with iFixit, we've imaged every iPhone model ever made.  Take a trip with us back in time as we chat with Jeff...

Product launches always catch our attention, especially when it’s something as widely anticipated as a new iPhone.  We got a look inside the new Apple...