In this new series of posts in our blog, we will be tearing down different products that we have around the office. Please feel free to suggest what you’d like us to teardown in the comments section below. But unlike many of the teardown websites out there, our posts will focus on the x-ray inspection of the product. Instead of physically taking gadgets apart, we will take them apart using x-ray images. That will provide you with a unique insight on how these devices that we love and use everyday are built.

The Samsung Galaxy S5 is the first device in our series of teardowns. With over 11 million Galaxy S5 sold this past quarter, the Galaxy S5 quickly became a homerun for Samsung. Sales of S5 outpaced S4 sales by over 1 million devices in the fist month in the market. Just a bit larger than its predecessor, the Galaxy S5 stands at 5.59” tall, 2.85” wide, and 0.32” thick. The Galaxy S5 has a beautiful 5.1 inches super AMOLED capacitive touchscreen display that produces an amazing 1080×1920 pixel resolution. To run this beast, Samsung equipped the Galaxy S5 with a powerful Qualcomm MSM8974AC Snapdragon 801 and a Quad-core 2.5 GHz Krait 400. A 2,800mAh battery gives the Galaxy S5 up to 21 hours of talk time.

So let’s take a look what’s inside the Samsung Galaxy S5. We took all images in this report using a TruView Elite x-ray configured with a 90kV microfocus source and a 3″x4″ flat panel x-ray sensor. First, here’s a shot of the whole device.

*Keep in mind that the phone was turned on and no parts or animals were harmed during the shooting of this x-ray inspection.

There are several resources you can use to map the x-ray inspection image to the component inside the Samsung Galaxy S5. One of the good sites to consult is ifixit.com. Here’s what a few of the components we were able to find in the Galaxy S5. 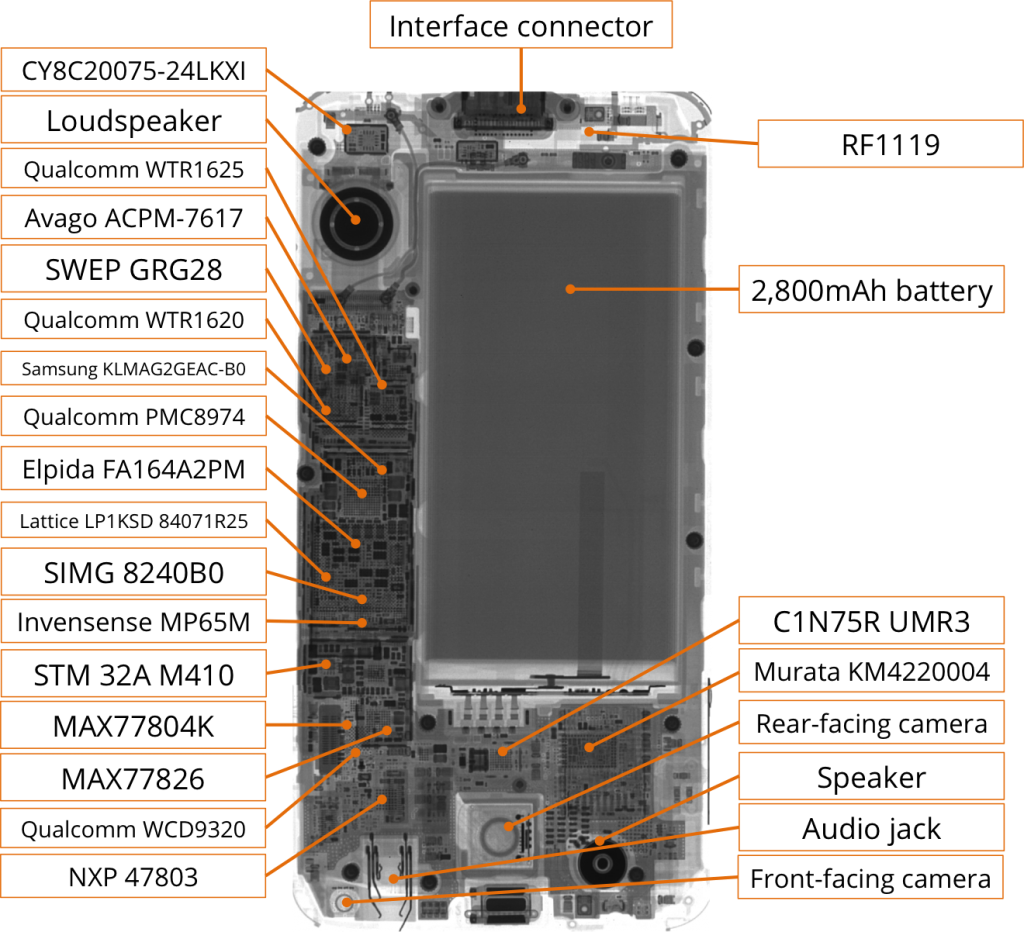 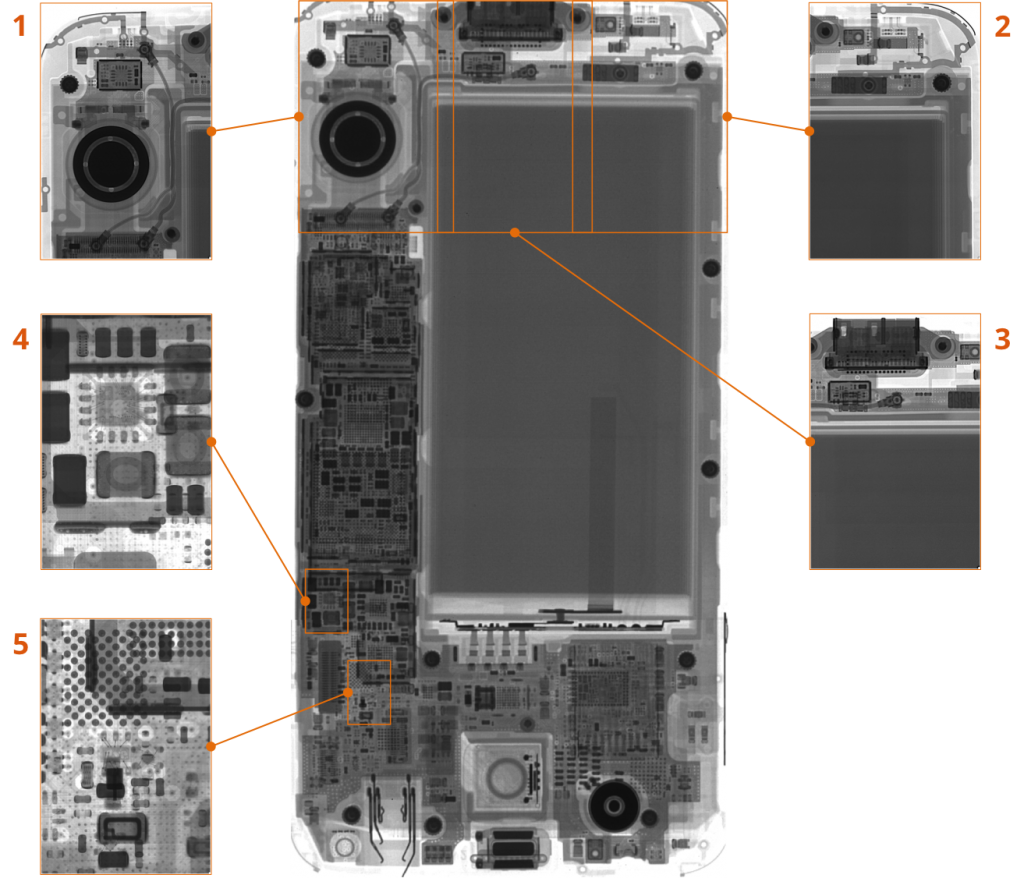 The first detail x-ray image shows the left top corner of the phone, where the antenna is placed. It is also clear to see the loudspeaker. The component in the corner is the Cypress CY8C20075-24LKXI, which is a CapSense capacitive touch-sensing controller. 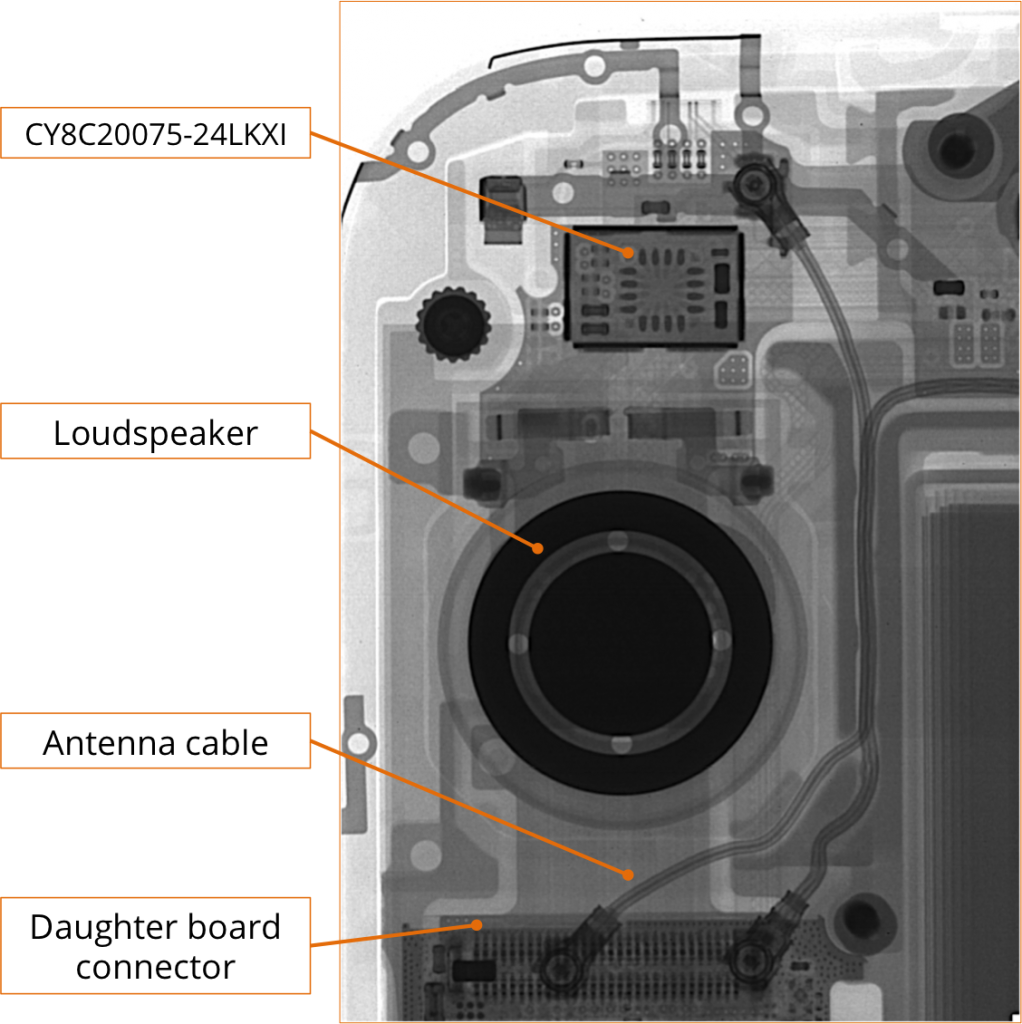 The next detail x-ray image we took shows the top-right side of the phone, where the antenna, microphone, and battery are visible. Note we can see the layers of the 2,800mAh Lithium Ion battery. 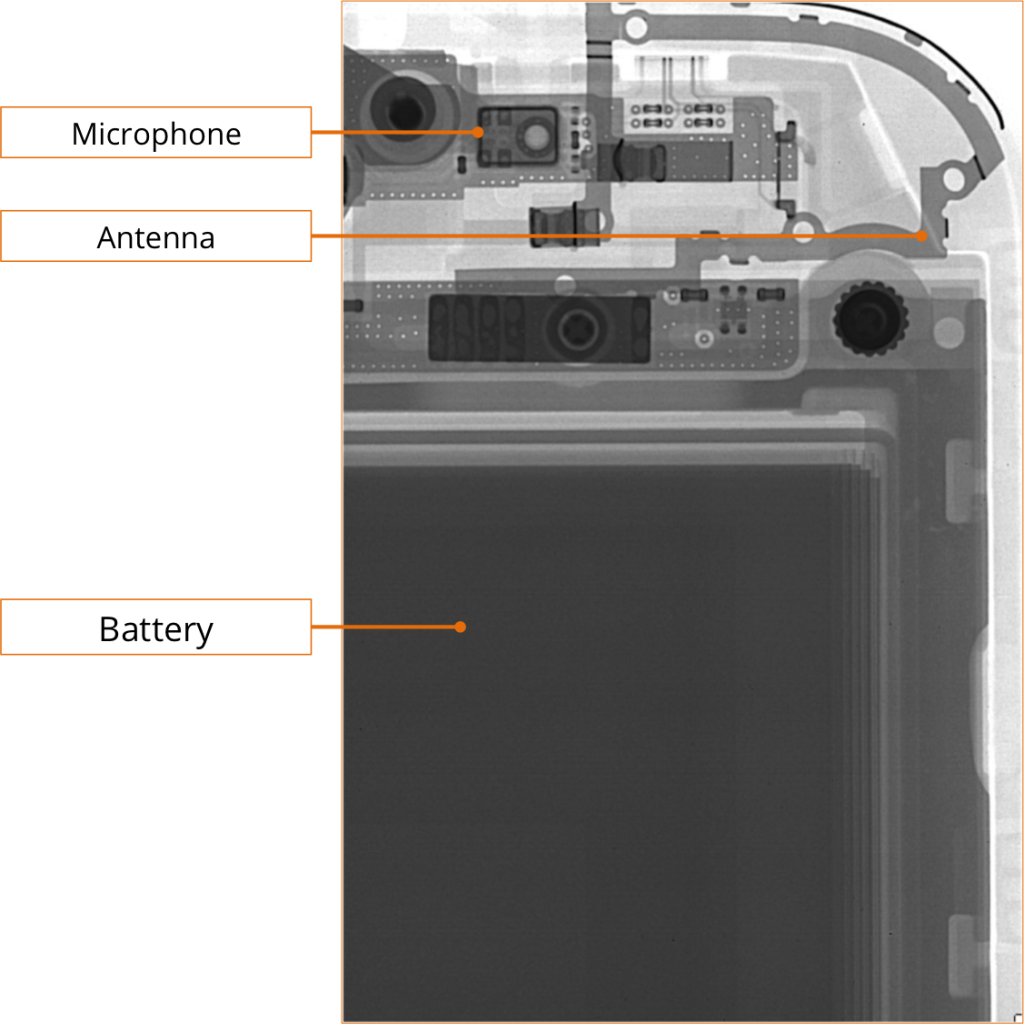 The center of the phone hosts the main interface connector with the USB port. It is also in this location in the Galaxy S5 that the fingerprint scanner is located. 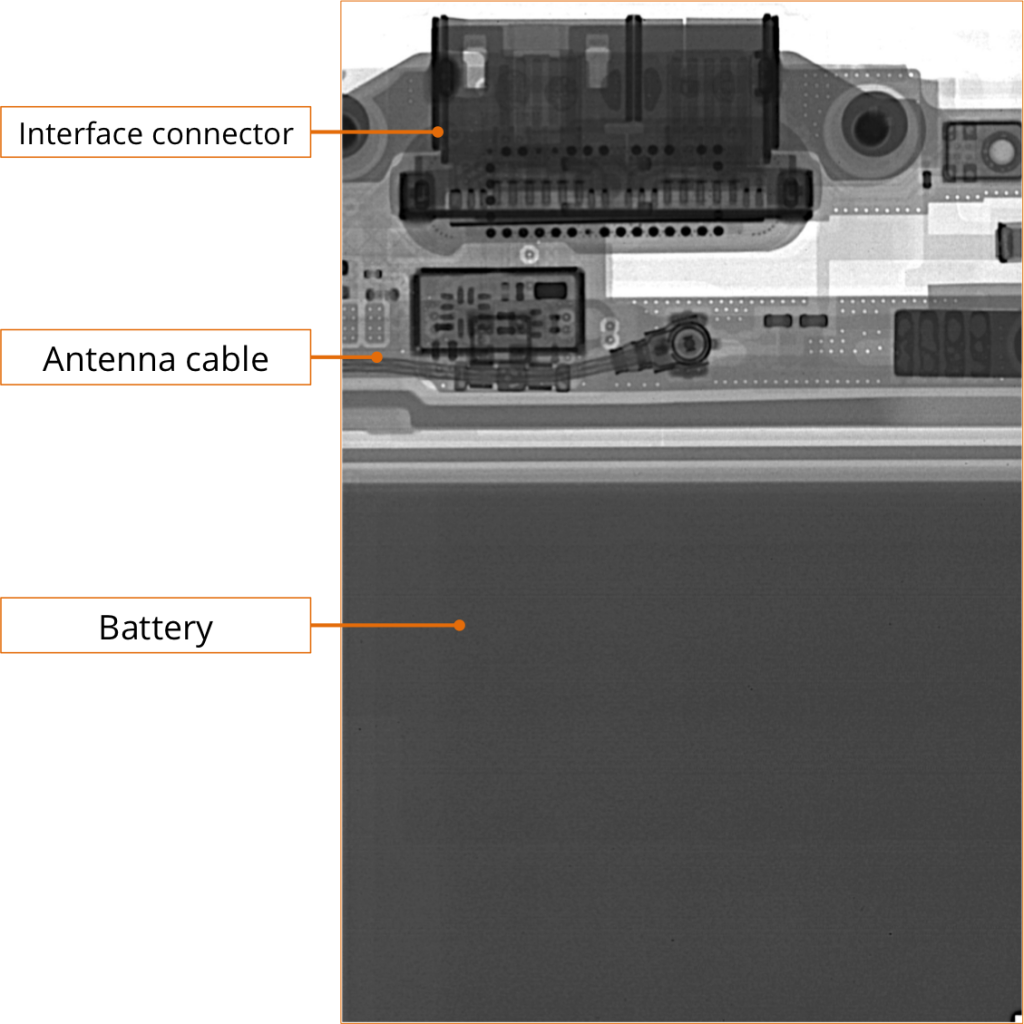 In the next couple of x-ray images we increased the magnification in our TruView Elite x-ray to capture some of the components in the Samsung Galaxy S5 in more detail. 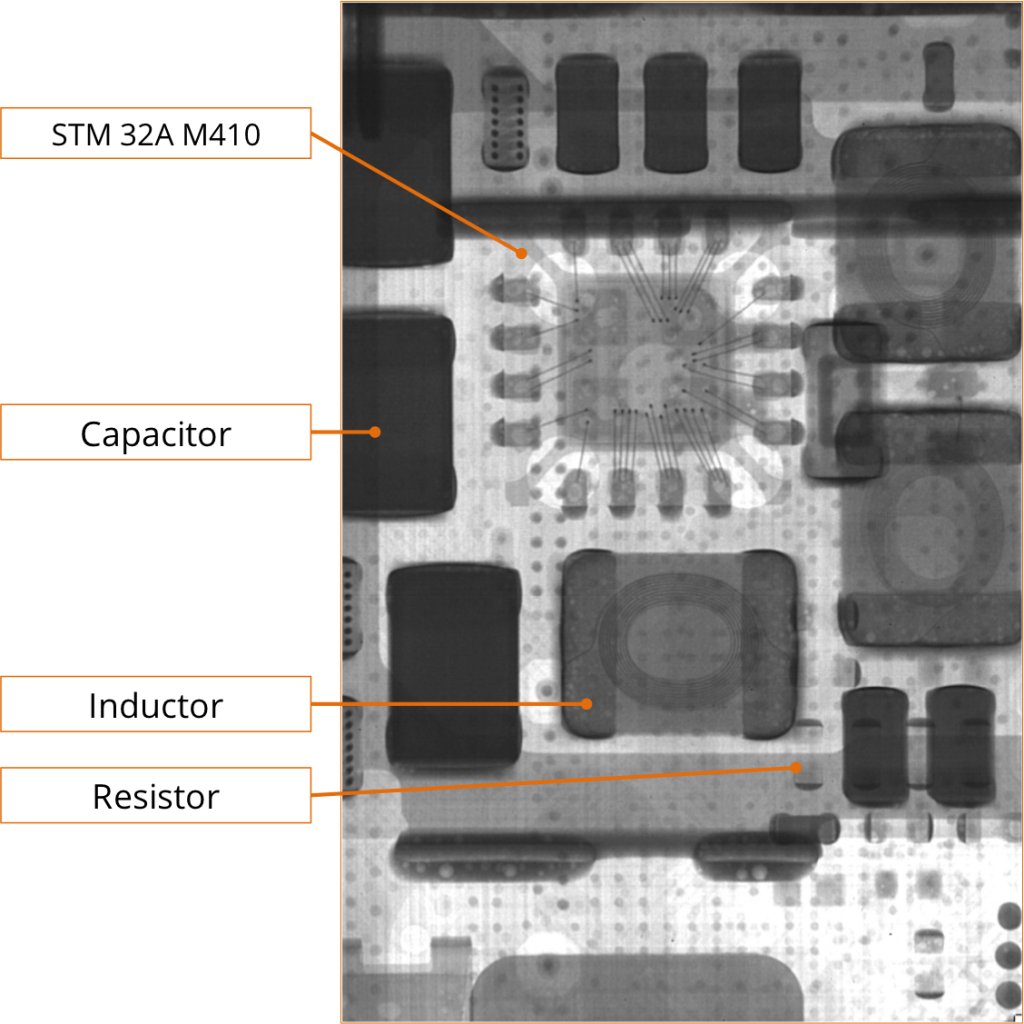 Note the voiding in the ball grid array of the Qualcomm WCD9320 in the following x-ray image: 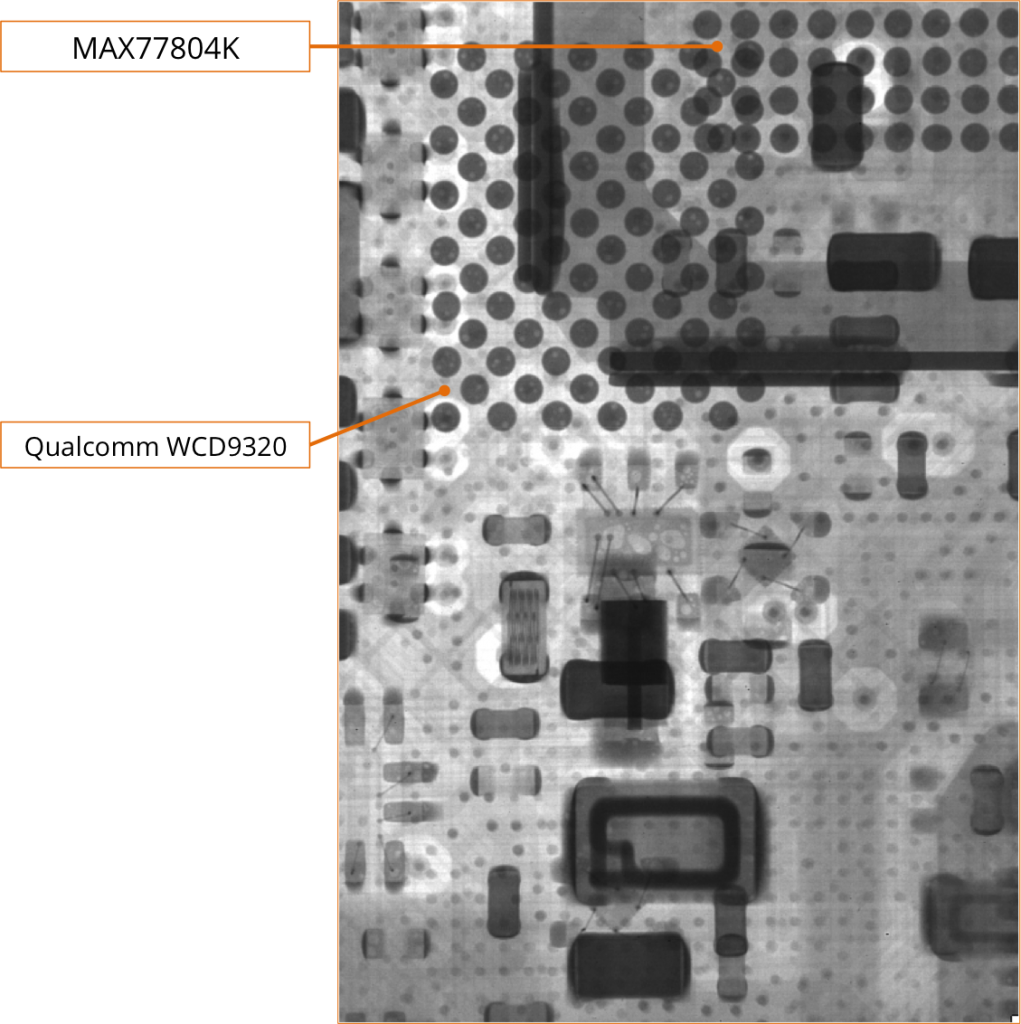 We hope you liked this x-ray tour inside the Samsung Galaxy S5. What would you like to see next? Let us know and we will make it happen!

Recalls Suck, but What’s the Cure?

Managing product defects is part of virtually every manufacturing effort.  Whether you are making sporting goods, consumer electronics, or any other widgets, product defects need...

We've long been fans of Mike Konrad's The Reliability Matters Podcast, so when Creative Electron's own David Kruidhof was invited to join in, we did...